Standards in Public Life I 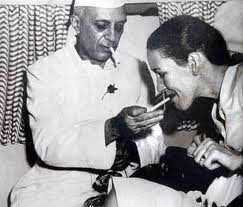 If at some point in our history, invertebracy has crept in and has firmly entrenched itself in our national character, it does not give us or anyone the right to paint our entire past and heritage with the same brush. The true test of our core nature would be this period of transition that we are not just witnessing, but are participating in as well.
If I sound like I have problems with democracy, then either the reader has not understood my point or I have not been successful in communicating my point clearly. All I am saying is that unless people stop equating democracy with chaos and unfettered reign of the individual’s whims and fancies, democracy will be a monumental failure in India in the times to come.

If people have problems with the State imposing discipline on them, then they must learn to discipline themselves, because there is no way discipline can be altogether thrown out of the window.
Do I sound like a martinet? Oh I know the reason, it’s the word “discipline”...
Posted by J.Sai Deepak at 4:13 PM No comments: Links to this post

Of Bhishma and Gandhi, Duryodhana and Jinnah 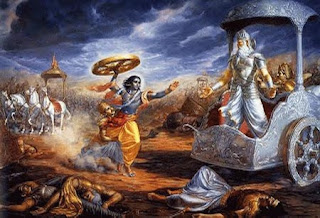 Living alone, sometimes, has its benefits. It gives you the luxury of pursuing the randomest of thoughts, interests and ideas without having to worry about what others may think (of course, this applies to only those of us who are affected by others’ views. For the lucky few who give a fig about what others think, life, for the most part, is a bed of roses).

These random thoughts seem to have a pattern to them, in that, they occur when you least expect them; I say so because they seem to come to the fore when your mind tries to focus on something else important and precious at hand. The mind then, being boundless in its capacity, stores this random thought at the back so that it may be mulled and chewed over at leisure.

One such random thought which occurred to me when I was in Divine presence, is the striking similarity in certain critical aspects between the lives of Gandhi (oh not Rahul or HRH "Madam" Sonia, but Mohandas Karamchand, the “original” Gandhi) and Bhishma (of Vyasa’s epic poem “Mahabharata”), Jinnah and Duryodhana (strangely, these two have never needed introductions).

Before I proceed any further, I must clarify that this is not remotely an attempt at sounding philosophical, I have no such pretensions. Rather, this is probably an illustration of how relevant history (I don’t consider it as mythology) can be, according to me, regardless of the age or era we live in.

Let’s begin with a bit of bittersweet trivia. “Mahabharat”, the serial, that grand magnum opus of Baldev Raj Chopra (not the horrendous imitation by Ekta Kapoor. May Lord Balaji Save us from Balaji Telefilms!), is one of the finest products of India’s syncretic traditions. Why? The script of the series was written by two extremely creative and talented individuals who come from different faiths (do I hear someone say antithetical?), but were bound together by art- Dr.Satish Bhatnagar and Dr.Rahi Masoom Reza. I remember these names distinctly having devoured the entire series bit-by-bit, episode-by-episode, for over 7 times now and still counting. (Sometime in the future, I shall write in detail about my obsession with this epic and its brilliant depiction by the Chopras).

A couple of months ago, in the course of a formal rendezvous with certain members of filmdom, we were told that Satish Bhatnagar was afflicted with the disease most common to his ilk- penury. Apparently, he was or still is in such a pitiable condition that he barely has the resources to make ends meet, leave alone afford his medical expenses.

To my joy, it was revealed that Bollywood’s so-called “brat” Salman Khan had come forward to put Dr.Bhatnagar out of his misery. Indians, most of us, for all our vaunted culture of giving, really have no sense of philanthropy or gratitude.

Guess that’s enough trivia for one post. Moving to the heart of the discussion, what parallels can be drawn between the lives of the “characters” in question? Let’s begin on a macabre note- their deaths. None of them had peaceful deaths (Sanskrit beautifully calls a peaceful death “Anaayasa Maranam”- when people pass away in their sleep), barring probably the exception of Bhishma who saw his life’s dream being achieved, and he passed away in the presence of the One he worshipped- Krishna.

But then even Bhishma did not live long enough to enjoy the fruits of his life’s penance, which is something Gandhi had in common with him. Further, while Bhishma was killed by someone he dearly loved, Gandhi too was assassinated by one of his people.

Both these individuals were known for their indomitable will power and also, their legendary (and at times controversial) obsession with their life-long vows of celibacy. Both saw celibacy as a condition precedent to achieve their personal and social objectives.

While Bhishma saw celibacy as a way of pleasing his father and abdicating his claim to the throne in favour of his future step-brothers, Gandhi strongly felt that if he could master his senses and carnal instincts, he could wrest for India its independence from the British. While the former had to face taunts of being a eunuch, the latter was derogated as being “hypersexed”.

If Bhishma felt thoroughly helpless before Duryodhana’s arrogance, dogged obstinacy and intransigence towards mending fences with his cousins, Gandhi thoroughly failed in convincing Jinnah about the futility and dangers of the idea of Pakistan. If Bhishma’s motherland had to suffer partition to satisfy Duryodhana’s insatiable hunger for power, Gandhi had to bend backwards to placate Jinnah and yet had to remain a hapless spectator to the bloody spectre of Partition.

If Bhishma had to pay the price for his undying allegiance to his vows with his life, Gandhi too had to do the same. If one of the strongest causes of the Mahabharata war was the outrage to Draupadi’s modesty, the cause which propelled Gandhi was what he saw as outrage to his Motherland’s modesty. Or some might say that Gandhi had to pay with his life for the outrage of the modesty of the women of one community.

What about parallels between Jinnah and Duryodhana? Most of the similarities have come out above, but what remains to be pointed out are again their deaths. Jinnah died of tuberculosis and Duryodhana died a gruesome death bleeding on the battlefield fending away nature’s scavengers.

Is there a point behind these comparisons? What is the moral of these lives? Holding on to one’s values is not the same as holding on to one’s vows because after a point, it becomes difficult to ascertain if these vows have come to represent a person’s values or his ego or worse, his fixation with his image in the eyes of those around him.

Why do I say this? In their final years, both Bhishma and Gandhi felt powerless and helpless for none paid heed to their words and they felt like mere props or relics from the past whose presence was needed to further certain vested interests. This leads us to wonder if Gandhi's fasts were his way of reinforcing his place in the larger scheme of things, and if they had the incidental effect of bringing about peace and amity between rioting factions.

It cannot be disputed that holding an entire nation to ransom with threats of fasts-unto-death reflects nerves of steel, but if it has the effect of rendering secondary the interests of the nation, it is best to turn a blind eye to such not-so-selfless displays of will-power.

On a lighter note, does God run out of ideas at times? What else would explain the oft-quoted dictum “History repeats itself”?
Posted by J.Sai Deepak at 12:41 AM 3 comments: Links to this post

Scope of Revisionary Powers of a High Court