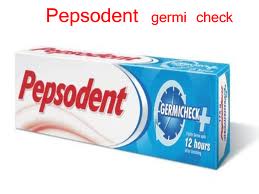 After fighting a bitter war on comparative advertising under the erstwhile Monopolies and Restrictive Trade Practice Act, 1969 between 1997 and 2003 which was settled, leading toothpaste brands Pepsodent (of Hindustan Unilever Limited) and Colgate (of Colgate-Palmolive) are at it again.

It remains to be seen if Colgate will treat this as commercial disparagement besides bringing it within the meaning of infringement under Section 29(8) of the Trademarks Act, 1999.

“In my last post, I had discussed in brief the recent advertisement for Hindustan Unilever’s detergent brand "Rin", in which a rival brand "Tide" figures prominently. Quite a few comments to that post referred to the Horlicks v. Complan judgment of the Delhi High Court. However, a more recent decision of the Delhi HC on the issue of comparative advertisement is available, namely the one delivered in the case of Dabur India v. Colortek Meghalaya (February 2010).

In this judgment, it was the case of the Appellant Dabur that its mosquito repellent brand “Odomos” was disparaged by an ad of the respondent Colortek which owned the rival brand “Good Knight”. The Division Bench of the Delhi High Court affirmed the Single Judge’s decision that there was no disparagement of Odomos in the impugned ad. Consequently, no injunction was granted against the respondent Colortek. To support its decision, the Court referred to a host of Supreme Court decisions on various aspects of the issue.

It was observed that dissemination of information about a particular product was necessary since it enabled the public to evaluate its options. The Supreme Court in its turn referred to the US decision of Virginia State Board of Pharmacy v. Virginia Citizens Consumer Council (1975) and said that it is almost settled law in the United States that though "commercial speech" is entitled to the First Amendment protection, the Government was completely free to recall “commercial speech" which is false, misleading, unfair, deceptive and which proposes illegal transactions.

In another case of Colgate v. Hindustan Lever (1999), the Court explained that although a seller has the latitude to represent his product in such a manner that he attracts more customers than he normally would have, such latitude would translate into description and “reasonable assertion” of the product, but not to misrepresentation. In other words, factual representations are perfectly legitimate.

The Apex Court went a step further to state that “commendatory expressions” are not dealt with as serious representations of fact.

To support this, the Apex Court relied on a rule of civil law, "simplex commendatio non obligat" , which means simple commendation can only be regarded as a mere invitation to a customer without any obligation as regards the quality of goods. In other words, every seller is entitled to call his goods “world’s best”, “Indian’s no.1”, “world-class quality” and so on.

However, the Supreme Court also cautioned that these principles are by no means conclusive since, by and large, cases of puffing are borderline cases, and that there exists a very thin line which separates puffing from falsehood.

In a nutshell, although commercial speech is available under the Indian Constitution to every seller, if the advertisement is false, unfair, misleading or deceptive, the seller is not entitled to seek protection behind “commercial speech”.

Having referred to the SC decisions, the Delhi High Court then referred to its earlier Pepsi v.Cola decision (2003), where it held that although a seller is entitled to glorify his product, in the process, he is not to denigrate or disparage a rival’s product.

"It is actionable when the words go beyond a mere puff and constitute untrue statements of fact about a rival’s product."

The Court also cited its decision in a case of comparative advertising involving Dabur and Wipro, where it held as follows:

Summing up these decisions, the Court laid down the following three-step test:

1. What is the intention behind the advertisement as deciphered from the storyline and the message ostensibly sought to be conveyed?

2. Is the manner of advertisement or comparison by and large truthful or does it falsely denigrate or disparage the rival’s product?

3. Finally, does the ad have the overall effect of promoting the seller’s product or showing the rival in poor light?

This particular decision of the Delhi High Court is very comprehensive because not only does it sum up the position of the law citing various sources, but also is progressive in its approach for it recognises the impact of the electronic medium. This is reflected in its observation that since the reach and influence of the medium is phenomenal, the advertiser has to per force walk a tightrope. He has to constantly ask himself if the ad runs the risk of having the effect, intended or unintended, of disparaging the rival’s product.

The Court did not stop here, but went further and said:

“we feel that notwithstanding the impact that a telecast may have, since commercial speech is protected and an advertisement is commercial speech, an advertiser must be given enough room to play around in (the grey areas) in the advertisement brought out by it. A plaintiff (such as the Appellant before us) ought not to be hyper-sensitive as brought out in Dabur India. This is because market forces, the economic climate, the nature and quality of a product would ultimately be the deciding factors for a consumer to make a choice. It is possible that aggressive or catchy advertising may cause a partial or temporary damage to the plaintiff, but ultimately the consumer would be the final adjudicator to decide what is best for him or her.”

This observation in a way balances interests of both the seller and the rival, and is of critical importance since it acknowledges market realities, which is a pleasant change for Indian Courts (One hopes that someday a similar sentiment will be adopted in “hardcore” IP matters).

More importantly, the underpinning of this observation is again the good of the consuming public.

Applying the above-stated principles to the facts of the Rin v. Tide controversy, one must assess and analyse the Rin advertisement objectively sans the mischievous light in which the media tends to portray such ads and the vicarious pleasure we derive as humans in seeing two competitors duke it out in full public glare.

One is unable to take a strong call here on this specific case because the question of “overall effect” of the ad is very subjective and one can never be sure of side-stepping the allegation, rather the minefield of arbitrariness in such cases.

On one hand, we could say that since Rin’s contentions are backed by tests of an independent lab, they are factual. A "balanced" view could say that the ad does not really disparage Tide, it merely has an element of mischief in it. I might even say that all mischief is not necessarily disparagement and I think considering the times we live in, what with reality shows and all, ads can no more be plain Jane representations of facts. Therefore, it could be argued that they are entitled to go beyond that, provided they are within the limits of decorum.

And on the other hand, the reference to Tide and its tagline may be seen as mockery. If, despite Rin's claims being grounded in facts, the primary focus of the advertisement is not facts such as the independent lab's tests, there is a chance that Rin (HUL) could be held liable for disparagement.

In other words, in judging the "overall effect" of the ad, the Court may have to look into the question of what caught or catches the eye or attention of the audience. Is the ticker which mentions independent lab tests prominent enough for the average viewer of imperfect recollection to see and remember? If the answer is a no, it probably establishes disparagement.

Further, Tide could seek to distinguish the Delhi HC's Dabur judgment on factual grounds saying that the reference to the rival brand in that case was not as obvious and as direct as it is in the Rin ad. Consequently, it could be argued that the accommodative view taken by the Court in the Dabur case cannot be the standard applicable for this case.

I realise, that in cases like these, counterpoints are bound to exist and thrive; but the one thing that comes out from such instances is that, as audiences, we still look for our own modern-day versions of the Colosseum and gladiators.”
Posted by J.Sai Deepak at 3:55 PM